Design a site like this with WordPress.com
Get started
We had feared that Hodsock was closing down its gardens to the public and were delighted to discover that though they will not be open for their customary month, they are having a ‘back to basics’ week from Saturday 9th to Sunday 17th February 2019. The photograph below was taken at one of their evening events, Saturday February 17th. This year’s ‘basics’ is a counterpoint to last year’s extravagance perhaps. My grandchildren, towards the right, enjoyed the merry fun, tramping through the trees following the thespians. Max got carried away engaging in conversation the guy swinging through the trees having imbibed rather too much of the festive wine.

Advertisement
Well, well, well. I scour the garden for those first named varieties to pop up and totally unexpectedly discover this lot amongst the fallen beech leaves at the bottom of the garden. The weather has been so mild of late the bulbs are soaring towards the light. It gladdens the heart.

Small, dainty and quite exquisite, Galanthus ‘Peter Gatehouse’ is often described as having an olive green marking on the inner petals. As can be seen in the image below, mine have a distinct yellow tinge. They were the same last year so I would say I’m a lucky guy because yellow(ish) is so very much more desirable than olive green don’t you think…. When I say small and dainty I mean scarcely over 10 cms. Planted in a pot by the kitchen window where I can clearly see them they lift the spirits when the sink seems full to the brim with messy dishes from the Christmas feasting.  We’re too good to our guests. But they’re not getting Peter! 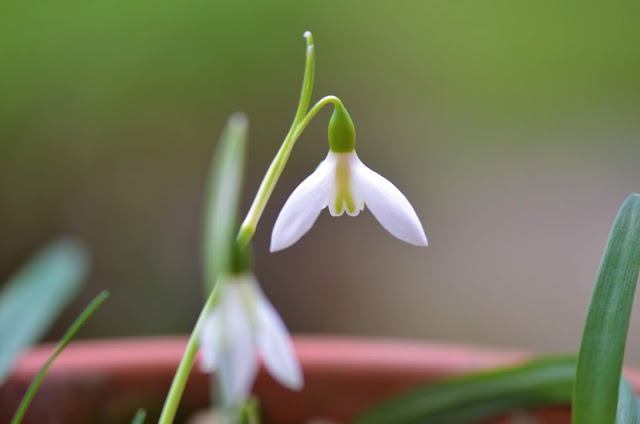 An apology for all my many reader. I had thought this a seedling from the reginae-olgae varieties that have been in flower for weeks, flowering in the warmest, driest section of the garden, baked this summer and now a sodden swamp in the wet early winter. It grabbed the Christmas spot this year, though there are other contenders beginning to bud up. In fact today (30th December) when weeding I found the label for it and its fellows pressed hard down into the earth.  I purchased it and several others of the ‘composer’ varieties last year at Hodsock. I merely cheated by revising the post ensuring my error is hidden by the miracles of the internet.

The former kitchen gardens and pleasure grounds of Wentworth Woodhouse are open to the public and this is my favourite photograph taken on November 7th. The 18th century gardens have a genuine historical feel, the garden centre owners having maintained them magnificently. Two more snaps, one showing the deer and the second the acer. The cafe was also pretty good today. No red leaves sadly.

On one of the best known sites for snowdrops Galanthus elwissi  ‘Remember Remember’  is noted for its inability to remain upright in the face of frost. Also for its inability to increase. It’s mild at the moment so I took the opportunity to photograph the flowers opened out, revealing the heart shaped inner green. This is the second year here and it has increased very well indeed so there are five flowering single flowered stems and a few shoots. I would say it is fertile enough. But for some reason it is late in flowering. I had great hopes of it being in flower for the 11th of the 11th, Armistice Day, Of course, the thing with these early flowering varieties is that one notices them precisely because they are early bloomers. Not so here for the snowdrop is a handsome sight, standing proudly in a garden rapidly being denuded of colour as the gloom of December settles in. The petals can have a dash of green to the base. Mine have none. Nice though. It was discovered by John Morley in his garden in 1992. John is responsible for the blissful North Green Snowdrops catalogue. Download it and dream away. One final word, the variety is often grown under glass because of its tender nature. I grow it in the most sheltered part of the garden by a south facing wall.