Hellebores provide great value for the winter months and extend into Spring. I’ve just been moving a number and they have distinct shoots, one double white showing colour. However it is the long period of flowering that I’m covering today. Here is a selection from 18th March. Bottom left is my favourite, ‘Janys’, named after my wife though the double white is delectable. I lost the original but it had seeded itself and they have stayed true to the parent. Top left shows the white fading to an attractive green though the top middle retains its colour. I cut down the rather coarse leaves as they come into flower and it does not harm the plants.

Two planted heads today. First is the newest ornament in the garden, bought from Ebay on impulse, photographed on 12th June, and planted with a trailing succulent that seems to withstand the roasting sun on the south facing wall. The flower was a bonus. Next up is a forty year old terracotta cat planted with the fuschia ‘Eruption’, 30th April vintage, that failed to erupt in cat, and also hanging baskets. The sun shrivelled the young plant in the cat and other plants in the hanging baskets submerged the remainder. I replanted the cat with a trailing nemesia that could take the heat.

I have posted shots of this early flowering variety before and I am aware of some users of Instagram revealing even earlier flowering specimens but this, as they say, does for me.  I have had several even earlier varieties showing already though ‘Remember Remember’ is the first truly significant one to feature here at a time when preparing the garden for winter has stripped away the colour. The dahlias were put to bed yesterday. The photograph was taken with my Nikon D3500 and a Nikkor 105mm lens. Discovered in a garden in North Green, Suffolk, in 1992, an interesting article about it may be discovered here. 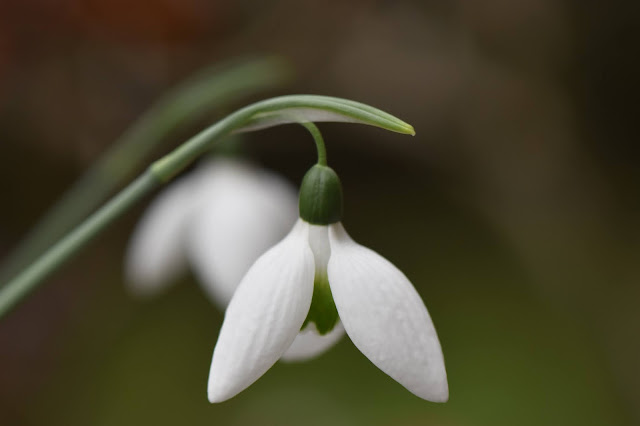 I have featured some old varieties of narcissus on these pages though no older than Van Sion, chosen to illustrate Division 4, the double daffodil of garden origin. The description is defined thus: More than one flower per stem, with doubling of the perianth segments or the corona (or both). This ancient variety is very variable, indeed it can have a distinctly green cast and I had neater specimens than this, photographed on 20th March. In his seminal ‘A Handbook of Narcissus’, published in 1934 EA Bowles gave a historical perspective on the age and origins of this great survivor: “Its first appearance in England is that chronicled by Parkinson, who tells in the Paradisus that Vincent Sion, a Fleming, living in London, cherished it in his garden for many years before it flowered in the year 1620. He thought that John de Frauqueville might have given him the bulb, but that worthy disclaimed the honor, never having seen the like before.” Tough as old boots and very reliable, there’s a certain charm in having such an historical bulb in our garden.

The humble day lily was neglected in our garden. They seemed an old fashioned plant, a legacy of the Victorian age. I’d see them in other gardens, crammed, dense and only a few flowers, a plant that quickly grew out of control. However if ever the hybridisers have got involved in a plant it’s with the hemerocallis. There are thousands of varieties out there and the names are fabulous too. Thoroughly Modern Lily. So I have about twenty specimens grown in the borders and pots. ‘Little Grapette’ flowered in a terracotta pot by the patio window, whereas ‘Frans Hals’ flowered profusely in a sunny border. Where I placed them in partial shade they have been disappointing. The individual flowers last no more than 24 hours but there’s a succession of always fresh blooms. Our plants are generally new though already forming clumps that I’ll have to keep an eye on as my space is limited. What I have discovered is that they don’t enjoy competition in their early months. A clump is a different matter of course. As they are not actually lilies those damn red beetles pose no problem. And some varieties of day lily possess a pleasant fragrance. Most importantly in our garden they give that tropical, bright colour at a time when we are denied travel to foreign shores. For the record,  ‘Little Grapette’ was photographed on 14th August, ‘Frans Hals’ on 28th July.

The blue poppy is the great Houdini in my garden because it has perfected a disappearing act. I’m in the process of completely redesigning the front garden, eliminating the island bed and widening a border to compensate. Scrabbling around for specimens to relocate I have been disappointed to discover two varieties have just disappeared without trace. Still, two specimens are left and ‘Mop Head’ was the earliest and though it has died down now there’s life there yet for another year. Meconopsis are short lived plants however and, to make matters worse, ‘Mop Head’ produces little seed. (I must divide it up in Spring!)  It is a classy looking variety however with very large upright flowers and it flowers earlier than most. The photograph was taken on the 11th May. A couple of years ago we saw the trial of blue poppies at RHS Harlow Carr. I noted the name and was not surprised when I discovered it had the coveted AGM. However ‘Mop Head’ has been around for years. In the 1980s Liz Young acquired the seed from an exchange scheme with members of the Scottish Rock Garden Club, naming it in 2007, the first link being to the Meconopsis Group. I’d recommend both groups. I’m a member of the first.

‘South Hayes’ was for a time the most expensive snowdrop in our garden – nowadays I tend to swap but that’s another story. I’ve had the bulbs for years and, truthfully, they are more beautiful than many recent varieties costing far more. Unlike the narcissus I have been writing about lately ‘South Hayes’ was not the result of painstaking hybridization. It was discovered in 1992 in the Oxford garden of Primrose Warburg, a noted galanthophile, and husband, William Frederic ‘Heff’ Warburg, a professor of Botany. The rear garden slopes dramatically and in the trenches of moist soil the plants seeded freely. The lovely yellow snowdrop, ‘Primrose Warburg’, named after the owner was another chance seedling. Interestingly, the now rather neglected garden has just been redesigned by Sarah Naybour Design. I’ve reproduced a ‘before and after’ photograph. An interesting article about Primrose is that in The Gardener’s Apprentice. The photograph was taken on 21st February.

A recent post concerned the demise of Cornwall’s world renowned bulb industry as the world famous daffodil fields were grubbed out for food production during WW2. I thought about this and remembered that Cornwall still has one of the world’s top hybridisers in Ron Scamp – the link is to a ‘Country Life’ article about him. So appropriately enough I chose one of his introductions ‘Cape Cornwall’ as representative of Division 2, large-cupped daffodil cultivars – one flower to a stem; corona (cup) more than one-third but less than equal to the length of the perianth segments (petals). ‘Cape Cornwall’, photographed here on 13th April, was introduced in 1996 and, true to type, has a large flower that is very bright and modern. Ron sells his bulbs by mail order and has plenty of new introductions, sadly sold out as I write.

There are plants that generate their own inner light and the truly exquisite dahlia ‘Yellow Star’ does just that. I cut down the plant this afternoon with a heavy heart as it was still laden with blooms. However contractors arrive any day now to remove what used to be a rockery from the front garden and everything has to be cleared. The tubers were healthy and are now in a good sunny spot with compost heaped above it for frost protection. I was tempted to store them in the shed but I’ve been lucky so far. Dahlias are great garden plants for late summer to the frosts; I just require them to survive winter. ‘Yellow Star’ goes back to 1952 introduced in the USA by Robens about whom I’m afraid I can discover zilch.

I set out to see if I had representatives of all the 13 different classifications of narcissus varieties. Today it is the Tazetta daffodil and a tribute to the breeder of the very lovely ‘Avalanche of Gold’,  William R. P. Welch who died in February at the age of 61. First the classification. This is a showy category, defined as ‘usually three to twenty flowers to a stout stem; perianth segments spreading not reflexed; flowers usually fragrant’. I have several and was tempted to feature the well known ‘Minnow’ or ‘Silver Chimes’. But ‘Avalanche of Gold’ won the day. A spectacular garden plant, photographed here on 22nd March, it has a spicy scent and between eight and fifteen flowers to each stem. Growing and selling his bulbs in Santa Cruz, Bill ‘Bulb Baron’ Welch seems to have been quite the character as his orbituary demonstrates. He was a witty man and a bright one, winning several major chess championships. His bulbs were his ‘bildren’. Given that the bulbs take up to seven years to raise from seed, he had a work ethic as well as wit. In 2019 he was awarded the Gold Medal of the American Daffodil Society. The image is of Bill taken from the society’s webpage.